What is Invisible Institutions?

Institutionalization is the ongoing removal, isolation, and confinement of people with disabilities from their communities into small or large sites of confinement, like long-term care homes, psychiatric institutions and prisons.

People First of Canada (PFC) is the national voice for people who have been labeled with an intellectual or developmental disability. PFC believes in the right to freedom, choice and equality for all.

Inclusion Canada (IC) is the national federation working to advance the full inclusion and human rights of people with an intellectual disability and their families. Inclusion Canada leads the way in building an inclusive Canada by strengthening families, defending rights, and transforming communities into places where everyone belongs.  The Invisible Institutions Research project is a project of the Joint Task Force on Deinstitutionalization. The Joint Task Force on Deinstitutionalization is a partnership between People First of Canada and the Canadian Association for Community Living.

This project aims to produce a pan-Canadian survey of institutionalization.

We are guided by the following questions:

This project aims to make information about institutionalization accessible to everyone. To accomplish this, we will use three primary formats:

What is an institution?

We use the Task Force’s definition of an institution:

So what are institutions that still exist today?

Across Canada, disabled people have taken action against the use of long-term care homes to demand deinstitutionalization. In Quebec in 2020, Jonathan Marchand locked himself in a cage outside the National Assembly to demand access to community living. He explained “I’m not just doing this for myself, my goal is to open the cage door by creating a precedent,” he explained. “Our freedom cannot wait any longer.”
In 2018, Tyson Sylvester locked himself in a cage in Winnipeg to protest his ongoing confinement in a long term care facility. He explained, “I feel locked out of life because, frankly, you cannot access any services and you are denied community living disability services.” 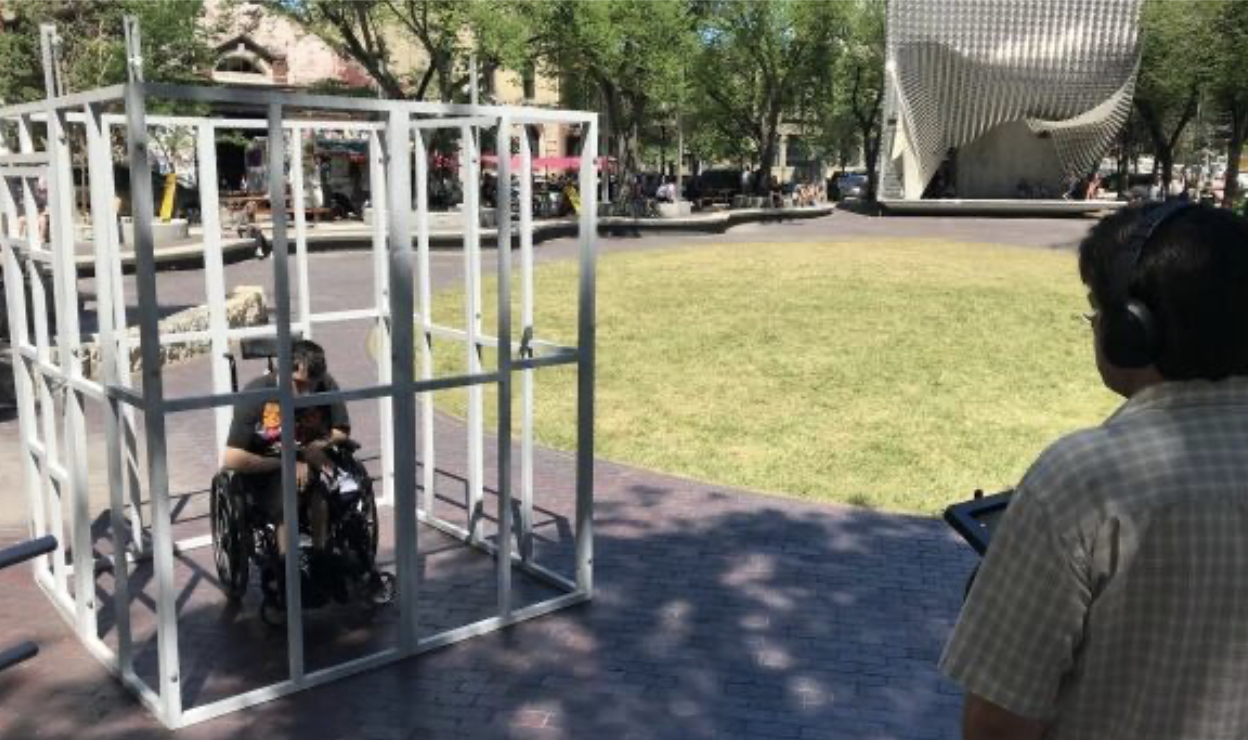 Group homes are segregated congregate settings that typically have capacity for between 3-50 people labelled with intellectual and/or developmental disability/ies (I/DD). Group homes grew in popularity and availability in the 1970s as a response to and alternative to  deinstitutionalization, and were intended for community living. However, group homes today maintain many of the forms of institutionalization they were supposed to  address and improve upon.

Group homes, no matter their size, are institutions. They limit people with disabilities access to privacy through shared rooms, high rates of staff, and security systems. Workers in group homes are typically given the authority to use physical and chemical restraints, and solitary confinement against disabled people – these are methods of control that limit the freedom, autonomy and safety of people with disabilities.

Group homes exist across Canada and are typically regulated by the province or territory. Each province has their own legislation.

Domiciliary hostels—also called residential service homes and housing with supports—are municipally regulated institutions. They are run privately and for profit. However, they also receive subsidies from provincial and municipal governments.

Domiciliary hostels segregate people with disabilities from their community, and are often located outside of major urban centres. Disabled people live without privacy in rooms shared with three people, adhere to set meal times, and receive a meager $149-per-month “personal needs allowance”.

More than 8,000 people live in the 325 domiciliary hostels in Ontario. This count excludes Toronto, which has an additional 223 institutions.

BURN IT ALL DOWN The Michener Centre in Red Deer,